Racquetball Canada is the National Sport Organization for the sport of racquetball.  As a member of the Canadian Olympic Committee, its mission is to coordinate, govern and encourage the advancement of racquetball from the grassroots to the elite level across Canada. Our vision is to be a visible, vibrant sport enjoyed coast to coast by Canadians of all ages and abilities.

Racquetball  Canada works closely with its provincial associations and partners to offer developmental and high performance programs across Canada for athletes, coaches and officials. The association offers coaching courses are part of the National Coaching Certification Program and are designed and offered in partnership with the Coaching Association of Canada.

Mission:  To coordinate, govern and encourage the advancement of Racquetball from grassroots to elite levels across Canada

Vision:  Racquetball as a visible and vibrant sport enjoyed coast to coast by Canadians of all ages and abilities

Donna Harris is a Chartered Professional Coach (ChPC) in Athletics skilled in program development and implementation.  The architect behind Athletics Canada’s coaching education program, she understands the components of performance and the steps necessary to illicit the best from everyone.  Donna recently completed a Master of Arts in Kinesiology and her thesis explored the impact of passion on the performance and lives of elite coaches and their partners (i.e., World and Olympic/Paralympic coaches).  The research outcomes lend insight into the requirements high performers need to be successful as well as the impact being a high performer has on the individual, their partner and their family.  Before joining Racquetball Donna worked with Coaching Manitoba, Athletics Canada and Athletics Manitoba. 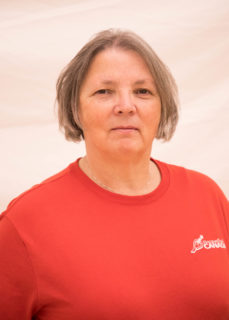 Geri Powell is an NCCP certified Competition Introduction coach and is in training as a Competition Development coach.  She was one of the key members involved in the development of the Competition Development coaching context for Racquetball and is well versed about the needs of coaches related to ongoing coach education.  Prior to joining Racquetball Canada as a staff member in 2011, Geri was involved with the Racquetball Canada Board of Directors for close to a decade.  Geri has worked in several staff capacities including Technical Director, High Performance Director and has been the Administrator of High Performance and Sport Development since XXXX. Geri is a long-time racquetball player, taking up the sport in 1994 and is the last person to win the Canadian Wheelchair Championship title. As a volunteer, she has been awarded the President’s Award and the Ivan Velan Award.