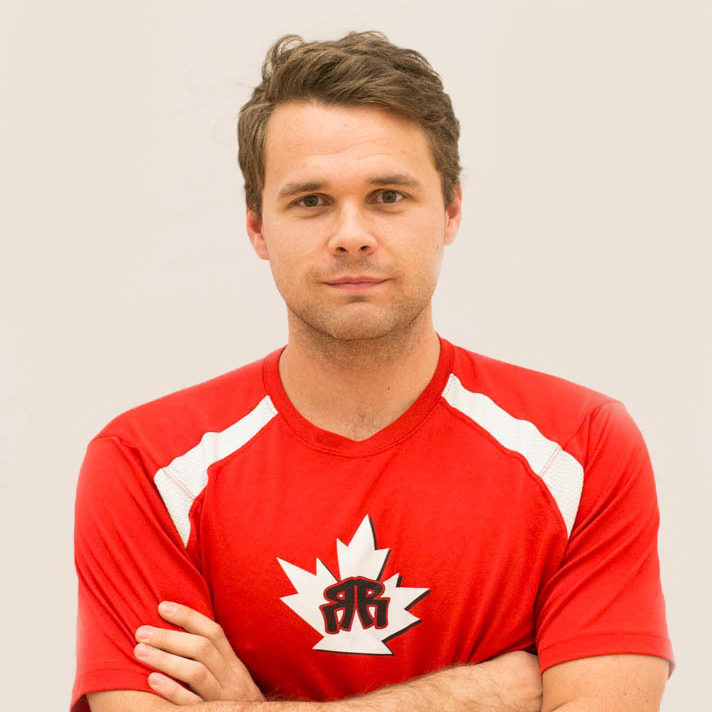 Samuel Murray made his international debut as a senior national team member at the 2014 IRF World Championships where he played singles. Murray has had a quick rise in rankings at the national elite level and on the International Pro-Tour (IRT)

Start in Racquetball:  I started to play when I was eight years old, with my brother. My parents had been playing for many years and always brought us along to the club in Baie-Comeau.

Reason for playing:   I play racquetball because I love the sport and I am good at it. I like to push myself to become better and like playing with my brother and training with my coach. I enjoy the competition racquetball offers me.

Training habits: A normal training week during the racquetball season, is for example playing racquetball 2 or 3 times with my brother, hitting balls 2 or 3 times with or without Rino, doing 2 cardio/gym sessions, and one deck hockey session. During the summer months, a normal training week is more like playing squash once or twice, doing 3 or 4 cardio/gym sessions, one deck hockey session, playing golf and mostly relaxing and having fun.

Best Racquetball moment or memory: My best memory in juniors is getting second place in U14 doubles with Kevin Caouette at the Junior World Championships. And my best moment since I began to play with the seniors is my victory against Tim Landeryou at the selection event in Winnipeg.

Non – Racquetball Talents: I am an excellent NHL Xbox360 player, and I am also good at squash and at deck hockey.

When you are not playing Racquetball you are probably: Watching TV, playing Xbox360 or playing other sports.

What is something that people might not know about you or find surprising?  I would like to go to University to become an electrical engineer.

Advise for athletes who want to play at your level: I would say to them: never quit, train hard and most importantly approach racquetball as a sport and not as a job.

Who has been important in your developed as a racquetball athlete? The most important factor in my development has been to move to Brossard with my brother to study and play racquetball. Since we have been in Brossard, I can train with my coach Rino Langelier more often and he can follow my development much more closely.